The SAR 24-Hour Pack in Winter

The air is getting a little chillier, and hunting season is coming: it's the busy season for Search and Rescue teams.  Thinking back to November in prior years, this is the time when resources are stretched looking for lost hikers, missing hunters, and those who have wandered away in the night.

I also recall heading out to searches where searchers were vastly unprepared to deal with the weather, terrain, and other issues of conducting SAR in a winter environment.  I've seen people show up for searches in snow wearing sneakers and jeans - of course, they aren't carrying any water or basic survival supplies either. Yes, though it is hard to control what the myriad of volunteers bring with them, as SAR team members - we must do our best to be prepared for all conditions.

Though clothing and footwear is a huge component for venturing out into the woods, what I think we should talk about first is the 24-hour pack.  Yes, we could load all of our winter camping gear onto our backs, but as the weight adds up - the mission gets tougher.  Our packs must be comprehensive, yet light and agile enough to deftly maneuver through the brambles.

Though my gear reviews are tediously long and comprehensive in their tests, this is my initial impression of the Ontario Little Bird knife.  Before lashing out at my general lack of cohesiveness and use of hardcore testing methods which snap blades in half, please remember that this is an initial review only.
First of all - I have a lot of knives - a lot of them.  That said, I am extremely picky about the ones I carry.  Unfortunately, most of my knives sit unused and under-appreciated in boxes in my basement.
There is something, when you first hold a knife in your hand, when you can tell it is meant for you.  Or perhaps you are meant for it.  Who knows what ancient chemistry awakens when we touch a fine blade?  Perhaps this is the "riddle of steel" after all.


Specifications:
Manufacturer: Ontario Knives OKC (Ranger)
Model: Little Bird II
Overall Length: 4.25 inches
Blade Length: 1.8 inches
Steel:  1095 carbon steel
Handle Material: Micarta (tan or black)
Weight: 3.8 oz
Sheath: Kydex
Why Did I Want This Knife?
So, you may ask yourself, especially those of you with Crocodile Dundee knives, why I would actually want such a miniscule knife.  As a backpacker, SAR-team member, and general outdoorsman I have grown to love neck knives.  There is nothing handier than a fine blade around your neck - this becomes especially handy when you are wearing shell pants without pockets.
I also wanted this knife for personal protection purposes. Though I usually tote around a Spyderco Rescue as my everday carry, there are certain defense applications that a stout little blade like the Little Bird may excel at.
I've also been a big fan of Ontario knives for a long time.  Not only are they made in the USA, their plant is only a couple hours away from me in the scenic Southern Tier of New York State. I carried one of their Spec-plus knives when I was in the Army and they haven't failed me yet.


Testing so Far:
Notes on this Knife (So Far):

Posted by Unknown at 8:03 PM No comments:

As a consultant for the "Wilderness Survival" section for Powder Horn training, I thought that an online resource list would help Venturing and Scouting leaders.  If you have an additional resource that you feel would be appropriate,  please use the comment section below.  As always, keep the links appropriate for Scouting.

Remember the Rule of Three: You can survive .... 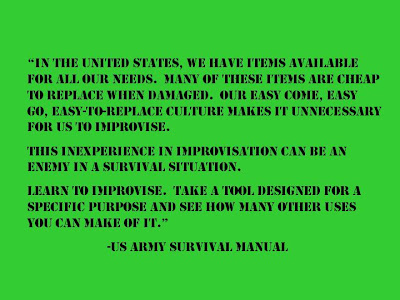 What are the seven survival priorities? 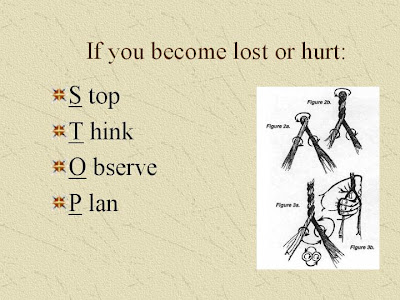 Just walk into an outdoor store and you'll see just how much gear is out there.  It can be rather overwhelming when deciding what to buy, what to carry, and where to carry it.  In the following articles, I've addressed the basic essential items for survival kits and for what we should all carry with us whenever we venture outdoors.

A medical emergency can quickly catapult "first aid" to the top of the survival priority list (just under positive mental attitude of course). Though an online article is no substitute for actual first aid training, the following link from NOLS has outstanding information.

For those of you that have taken the American Red Cross "Wilderness and Remote First Aid" training class, check out the Wilderness First Aid Reference Guide.

You never know when you'll have to rig a tarp with a tautline hitch or rig an emergency rappel with a munter.

Everyone should be able to make a improvised shelter for the region in which they are traveling; the debris hut is an ideal shelter for most situations.  That said, the process of building a primitive shelter can be environmentally destructive and violate the principles of Leave No Trace.  For eco-friendly survival shelters, consider the following:

NOTE: (Before you begin wilderness survival, you must have completed the cooking, land navigation, and first aid core requirements.)